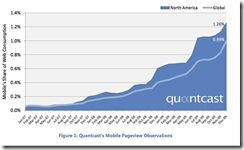 Looking for some mobile trends, I found a report from Quantcast about mobile web trends from 2009. It has a ton of data and charts looking at trend for North America and World wide. I’m mostly concerned with North America. Below are some quick notes regarding device venders, mobile operating systems, and browsers. One note, Quantcast metrics are collected using a pixel, which means there is probably a high degree of data loss due to devices that don’t support images and/or connections that are too slow to download the pixel.

The top device venders, largest to smallest, Apple, BlackBerry, HTC, LG, Motorola, Palm. These cover the top 90% of devices using the mobile web at the end of 2009.

The top operating systems, largest to smallest, Apple, Android, Rim OS, PSP. The top three covering about 86% of the market at the end of 2009.

The top browsers, largest to smallest, Apple, Android, Rim OS, NetFront, The top three covering about 86% of the market in almost the same proportion as the operating systems.

Symbian accounts for < 1% of the mobile web market in North America at the end of 2009. Just over 3% world wide.

Apple is the top player, but they are declining along with Palm.

Androids openness has made it the number two operating system and browser.

Almost no one changes the default browser on any operating system.

The iPad will help Apple some, but I don’t expect them to have a 1.5 year advantage like the iPhone had.

Mobile applications of popular sites will remain strong, but mobile versions will start to catch up as people realize most apps don’t have an advantage to being installed, and may hurt the devices battery life.